Periodically in the coarse of writing an OpenVR app, I find that SteamVR can't talk to my HMD. One of the 500 processes that collaborate to make VR work has kicked the bucket. Here's the formula to fix it.

First, kill the process tree based on OVRServer_x64.  All the Oculus stuff should die and then immediately respawn. Minimize their portal thingie.

Now you're good - relaunch your game and SteamVR should restart and be able to communicate with the headset.
Posted by Benjamin Supnik at 11:51 PM No comments:

"Quick Recalibrate" Fixes the SteamVR Floor for the Oculus Rift

I have the same problem that a lot of users report on the web: while my Oculus Rift knows where my floor is when I am in the Oculus home room, SteamVR gets confused and moves the floor up a foot or two, which makes me 3 feet tall when using a "standing" game. You can tell this problem is caused by SteamVR because even the SteamVR loading screens and settings are wrong, not just games.

Turns out there is a quick fix! Go to SteamVR settings, and in the developer section, you can use "Quick Calibrate."  Put your HMD on the floor in the middle of your play area, click once, and everything is fixed.

The only down-side is: you need a play area where your sensors can see the floor.  For me, this means putting the center of the play area unnecessarily far back, since the Rift sensors are on my desk.

Now I just need to find a way to fix the condensation inside the Rift.
Posted by Benjamin Supnik at 3:01 PM No comments:

Why Your C++ Should Be Simple

I have a lot of strong (meaning "perhaps stupid") opinions about C++ and how to use it (or not use it), and I've been meaning to write posts on the thinking behind these stupid^H^H^H^H^H^Hstrong opinions, particularly where they go against the "conventional wisdom" of the modern C++ community.

This one is sort of an over-arching goal:


Write C++ that is less sophisticated than you are capable of writing.

This idea is a rip off^H^H^H^H^H^Hriff on a Brian Kernighan quote that I think is perhaps the best advice about  programming you'll ever hear:


Everyone knows that debugging is twice as hard as writing a program in the first place. So if you're as clever as you can be when you write it, how will you ever debug it?

First, that's not wrong, that's dead on. So for debugging alone, don't write the most complicated C++ you can. C++ is an extremely complex language in its spec and if you use it to its full capability, you can write something that is completely un-debuggable.

Here's my take on the idea. You're welcome to dismiss this as the mad ramblings of a father who is over 40 and literally cannot remember to finish steeping my tea because it's been an entire four minutes since I left it in the kitchen.

There's a limit to your mental bandwidth. That mental concentration, focus, short term memory, and whatever else the squishy gray GPU between our ears does can be spent on a few different things:

I'm sure there's more, but you see where I'm going with this. You have a lot of things you can use your brain for, and some are more useful for getting your job done than others. You have to decide where to spend your brain budget, and you can't spend it on everything. (If you feel like you're not tight on brain budget, it means you're not working on a problem that's hard enough yet! You can always make the problem harder by shortening the time frame. Shipping things sooner is pretty much always a win.)

My view is that "being clever with C++" isn't a fantastic investment. Using the most bleeding edge C++ doesn't have enough benefit in other areas (code is faster, code is more maintainable, code is easier to debug, code is easier to understand) to justify burning brain power on it. In some cases, it actually moves you in the wrong direction.

Just because C++ lets you do it doesn't mean you have to or that it's even a good idea. Here are some examples where I consider a C++ feature to add complexity and not provide returns:

I could go on, but you get the idea...I'm one of those old bastards who thinks it's okay to just use C++ as "a nice version of C". Because it is! In my time here in the matrix, I have found that I have written past code that was too complex, language wise, and too simple. Here's the difference:

So why not err on the side of simplicity? Here are some other things you could do with your brain instead of writing C++ for the C++ elite:

If you are a professional software engineer, you are paid to solve people's business problems, and you use code to do that. Every Gang of Four pattern you use that doesn't do that is wasted brain cells.
Posted by Benjamin Supnik at 1:17 PM 7 comments: 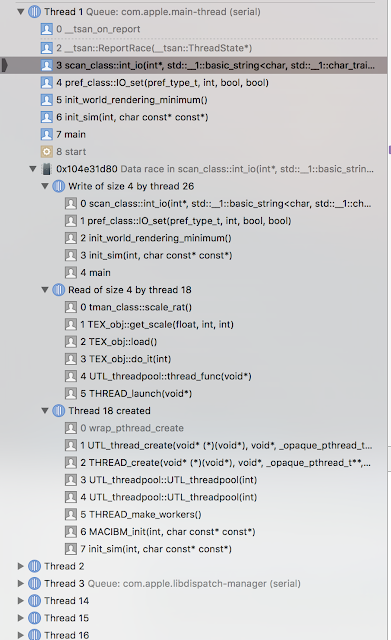 Posted by Benjamin Supnik at 10:27 AM No comments: