Just a science experiment from the weekend.  LDraw parts have been scaled to get them to all fit on screen together. 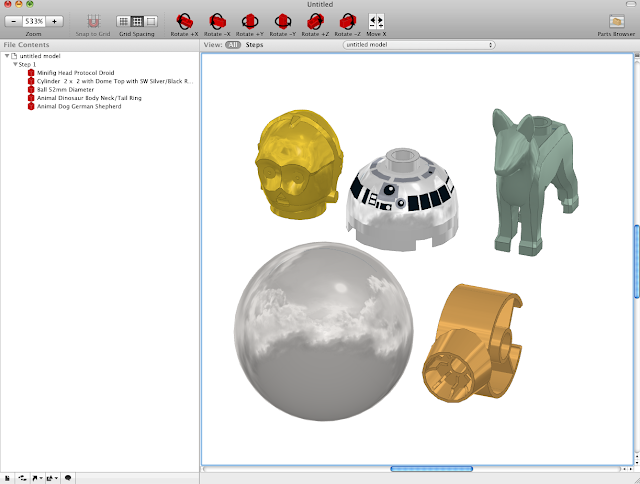 Posted by Benjamin Supnik at 9:55 AM No comments:

I was flipping through MOC-train pictures and was struck by this image.  What got my attention is not only that it is a very well done model, but also that it is one of the few images in the photo stream that really pops despite being a computer-graphics render (as opposed to a photo of a real lego set); most of the renderings don't have the same "ooh" factor as real models.

I was able to get smooth shading working (more or less) in BrickSmith, at least as a prototype, and that got me thinking: what are we going to do with the new rendering engine?  Now that we have shaders and smooth normals, what lighting would actually look good?  The existing lighting model makes models look like a bit like instructions; it's great for clarity and editing without eye strain, but no one is going to think you're looking at a photo.

So I took the only lego set I actually own now (the Maersk train), and held it up to the window while turning it. I don't actually play with it - it just sits on my shelf, so the parts are still clean and relatively finger-print free.  It looks to me like there are a few critical lighting effects that we'll need to capture to get a high quality render.  The good news is that they are probably all doable in real time.  Here is a brain dump:

I will be the first to admit that I have no idea how a material BDRF, local screen space GI, and environment maps play together.

Those questions may also be slightly moot; the LDraw data for parts does not contain normal maps or even surface roughness descriptions, so good input data on the lighting properties of the bricks might not even be available.

But this is all walking before we crawl; smooth normals are not fully coded or debugged, the new renderer hasn't shipped yet, and I still don't have an LOD scheme to cut vertex count.
Posted by Benjamin Supnik at 12:48 PM No comments:

How to Jam an Arrangement_2 into a General_polygon_set_2

I spent about three hours yesterday tracking down a weird bug in CGAL - I have code that builds a general polygon set out of an arrangement, exports the polygons, and weirdly the polygons had duplicate points.  This is an impossibility for a valid arrangement.

To my annoyance, I discovered today as I went to write the bug up that I knew about this bug...over three years ago. :-(  I get annoyed when I search for the answer to an obscure OpenGL problem and find my own post (e.g. I'm not going to find anything I didn't already know), but it's even more annoying to waste hours on the bug and then have that happen.

Basically if you are going to build a general polygon set by providing a pre-built arrangement, there are two things you must do:

(After redundant edge removal, the arrangement will contain no antennas, so it will always be possible to get consistency on both sides of a CCB.)

I wrote code to enforce this second condition by flipping the curve of any halfedge where (1) the curve goes against the halfedge and (2) the halfedge is adjacent to the "contained" side of the map.

With this, polygon set operations work on arbitrary map input.


Why Did You Try This?

Forcing pre-made arrangements into polygon sets requires sub-classing the general polygon set template instantiation to get direect access to things like the arrangement, and it's not particularly safe.  It also requires your arrangement to have the containment flag on the face data mixed in.  Why go to the trouble?  I did this for two reasons:
When an arrangement is turned into a polygon set, one of the results is a rather drastic map cleaning.  Since the polygon set cares only about containment (what points are in, what are out), random features like roads tend to get blown away.
Posted by Benjamin Supnik at 12:20 PM No comments: