My curiosity always pushes me to upgrade to the latest OS despite the caution issued to me by Ben. I upgraded to Lion and quickly found that XCode 3.2.6 cannot be installed on Lion. We're not ready to move completely to XCode 4 just yet so I had to find a work around. Luckily, there is one.

Basically, you just have to follow these simple steps:
Because I need to run XCode 4 and XCode 3.2.6 side by side, I installed XCode 3.2.6 to /Developer-3.2.6 and let XCode 4 have the default /Developer directory.

Ok that gets me a working copy of XCode 3.2.6 as well as the SDKs that I need which are 10.5 and 10.6...but I'm not out of the woods yet because the X-Plane Scenery Tools requires the 10.5 SDK. I have it so there's no problem right? WRONG! The GCC being used by the system is in /Developer and if you take a look at /Developer/SDKs you'll see 10.6 and 10.7 but no 10.5. That's because 10.5 lives in /Developer-3.2.6 but GCC won't be looking there. My solution was to create a symbolic link (the linux kind ln -s, not the Mac Alias kind) in the /Developer/SDKs folder that points to the /Developer-3.2.6/SDKs folder. The actual command was:


So now with that done, GCC now has access to the right SDKs. The finder view of /Developer/SDKs should look like this:

At this point, I tried to compile the libs necessary for the X-Plane Scenery Tools again but was hit with one more snag as it was failing to find bits/c++config.h as referenced by iostream.h and a dozen other files. It turns out that the new GCC is a darwin11 version of the compiler. That's fine but if you look at /Developer/SDKs/MacOSX10.5.sdk/usr/include/c++/4.2.1/ you'll notice that there are several folders that are named with respect to the GCC version they're designed for...the ones we care about are:
Here's a screenshot of what it looks like on my system: 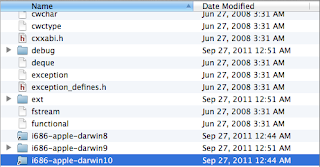 
After these steps, the universe seemed to be back in order again. XCode 4 and XCode 3.2.6 co-exist properly and the scenery tools compile using the newer version of GCC even using the older 10.5 SDK.
Posted by Chris at 12:43 PM