When optimizing code, is a 1% optimization (that is, an optimization that reduces run time by 1% a lot)? Well, yes and no. For any code optimization, we have to look at two important factors: leverage and repeatability.

This is why using an adaptive sampling profiler like Shark is so important. A Shark time profile is your code sorted by leverage. Let's take a look at a real Shark profile to see this. 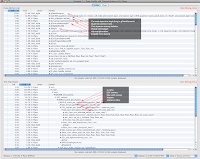 This is a Shark profile of X-Plane 9.62 on my Mac Pro in an external view with pretty much the default settings. I have used Shark's data mining features to collapse and clean the display. Basically time spent in the sub-parts of the OpenGL driver have been merged into libGL.dylib and libSys is merged to whomever calls it. We might not do this for other types of optimizations, but here we just want to see "who is expensive" and whether it's us or the GL.

The profile is "Timed Profile (All Thread States)" for just the app. This captures time spent blocking. Since X-Plane's frame-rate (which is what we want to make fast) is limited by how long it takes to go around the loop including blocking, we have to look at blocking and focus on the main thread. If we were totally CPU bound (e.g. other worker threads were using more than total available CPU resources) we might simply look at CPU use for all non-blocking threads. But that's another profile.

What do we see? In the bottoms-up view we can see our top offenders, and how much leverage we get if we can improve them. In order of maximum leverage:
The profile also shows a top-down view. This view gives you a strategic view of where the overall leverage might be. We're spending 77% of our time in scenery. Right there we can say: most of the leverage is in the scenery engine - a lot more than might be in the flight model. (In fact, the entire flight model is only 5.7%.) Most of this time is then in the DSF. The airplane shows up (9.6%) but within it, the vast majority is the OBJs atttached to the airplane.

In fact, if you look at the two profiles together, the low level leverage and strategic view start to make sense . Most of that glDrawElements call is due to OBJs drawing, so it's no surprise that the airplane shows up because it has OBJs in it.

So the value of an optimization is only as good as its leverage, right? Well, not quite. What if one of my shaders can be optimized by 50%, but it's one of ten shaders? Well, that optimization could be worth the full 50% if I repeat the optimization on the other shaders.

In other words, if you can keep applying a trick over and over, you can start to build up real improvement even when the leverage is low. Applying an optimization to multiple code sites is a trivial example; more typically this would be a process. If I can spend a few hours and get a 1% improvement in shader code, that's not huge. But if I can do that every day for a week, that might turn into a 10% win.

So to answer the question "is 1% a lot", the answer is: yes if the leverage is there and you're going to keep beating on the code over and over.
Posted by Benjamin Supnik at 12:43 PM